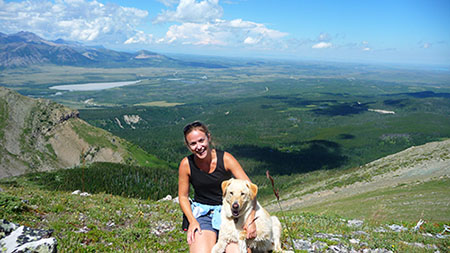 Conserving predators is important because of their role in ecosystem structure, function, and processes, as well as their potential to serve as umbrella species for
wider biodiversity.  Carnivores also provide cultural and social value, and are often used as conservation icons or flagship species for conservation efforts.  Yet, coexistence in multi-use landscapes remains a challenge because carnivores often conflict with humans and human land uses by destroying livestock, property, and threatening public safety.  In Alberta, carnivore conflict is greatest in the southwestern corner where carnivore home ranges substantially overlap ranching. Understandably, such conflicts are a huge concern for local residents, livestock producers, and the provincial staff tasked with managing these conflicts.  Developing a better understanding of the type, source, and spatial distribution patterns driving carnivore-ranching conflicts is critical to developing mitigation programs capable of effectively reducing conflicts and maintaining large carnivores on the landscape.   The most successful mitigation programs are likely to be those that start with a clear understanding of the types and spatial patterning of regional carnivore-human conflicts, use methods palatable to local communities, and provide a mechanism for monitoring the response to various mitigation efforts. 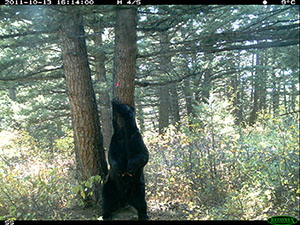 My overall objective is to identify areas on the landscape where human-carnivore conflicts have the highest probability of occurrence, and to evaluate the efficacy of various programs to reduce carnivore-ranching conflicts.  My work will primarily focus on grizzly bears because of their provincially threatened status.  Specifically, my objectives are to evaluate:

1.  Spatial patterning of large carnivore conflicts over the past 14 years
2.  Changes in grizzly bear populations, densities and distributions
3.  Role of learning in grizzly bear propensity for conflict
4.  Efficacy of intercept feeding program
5.  Cattle stocking density and wolf depredation of cattle